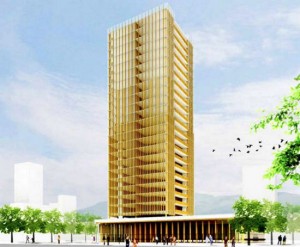 Canadian cities, and in fact most major cities around the world, have been criticized of late for lacking soul. The modern, glass-clad aesthetic of many a modern structure, skyscraper or otherwise, has come under fire recently by more than one major architect, with Frank Gehry and Lawrence Nield leading the charge against ‘zombie buildings’ which lack cohesion, soul or substance.

Now, timber architecture is stepping in to fill that void.

While timber has always played a role in industry developments new timber engineering has led to designs for timber skyscrapers in all corners of the globe.

Plans for Michael Green’s Tall Wood Tower in Vancouver have earned an extended stay in the public consciousness due to the growing interest in timber design.

Announced at the beginning of the year, Green’s 30-storey skyscraper will use Laminated Strand Lumber beams instead of steel beams, with the wooden components glued together in layers and able to withstand intense pressure.